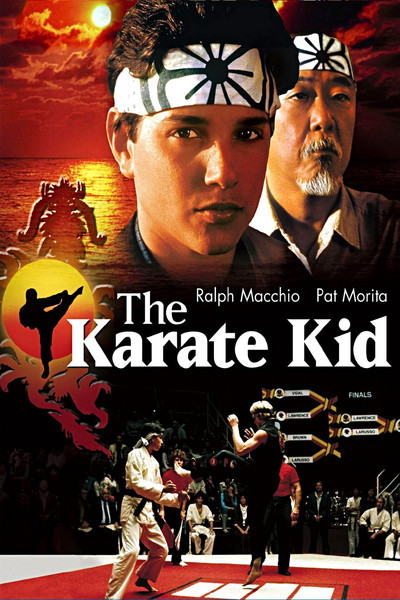 A handyman/martial arts master agrees to teach a bullied boy karate and shows him that there is more to the martial art than fighting.

The Karate kid (1984) is one of my favourite movies.  This movie is exciting, sweet and gives you that warm fuzzy feeling.  The under dog wins!  I think what was most surprising in this movie was the friendship that develops between Miyagi and Daniel.  This movie is full of unforgettable moments like sanding the floor and painting the fences which turns out to be the system to Mr. Miyagi’s karate training.  It should be known that magic of the Karate Kid is not in the martial arts but it’s in the relationships, Daniel’s relationship with Mr. Miyagi, his mother and the beautiful Elizabeth Shue.  “rich girl” falls for “wrong side of the tracks” poor boy!  We’ve seen this love story a million times!

Macchio nailed the part of Daniel.  But it is Pat Morita who steals the movie “wax on” “wax off”  If you have not seen this movie I highly recommend The Karate Kid for it’s “coming of age” story as well the innocence of friendship found between generation gaps and different worlds.

Also the musical score in this movie is breathtaking.

Neilsflix Rating: A Must Watch Again! 5/5